Hit enter to search or ESC to close

Home   /   The great Australian dream – Is home ownership for millennials a reality? 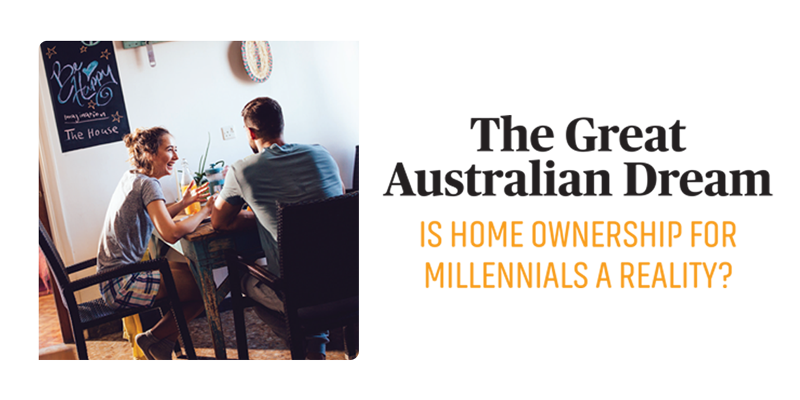 The great Australian dream – Is home ownership for millennials a reality?

Is the Great Australian Dream to own your own home over? That’s the question on the lips of Millennials around Australia… and indeed many of their parents who are still providing a roof over the head of these 20-plus somethings.
Owning your own home used to be considered a rite of passage. Finally, you’ve left the parental nest and headed into the big, wide world, ready to stand on your own two feet and build a new life for yourself as you learn to ‘adult’.
So, when did it become less of a right and more of a privilege?
Millennials, or Gen Ys, are finding stepping on to the property ladder is becoming increasingly more difficult as buying a house seems less of a ‘great dream’ and more of a ‘distressing nightmare’, especially as saving a deposit just gets harder and harder with the cost of living continuing to rise and wages stagnating.
And even if you do save enough to put a deposit down, it’s rarely on a three-bedroom house with a decent-sized block.
In fact, apartment living in the urban setting has become a global trend1 as owning an actual house remains out of reach for the younger generation and first home buyers.
Then there’s out-of-cycle interest rate rises by three of the four major banks (and some smaller lenders), lenders very wary of some areas where over-supply is an issue and considered high risk and also introducing lower loan-to-value ratio (LVR) mortgages for new units in some suburbs, and lenders becoming more selective about who to loan to in terms of household income and the ability to make repayments, thereby limiting borrowing capacity.
Let’s not forget that wages have not risen alongside CPI but everything else under the sun has. Did you know the cost of living in Australia is 2.49 per cent higher than in United States but rent is 8.64 per cent lower2? Of course, this all depends on where you are living. Sydney and Melbourne are often cited as being the most expensive cities in Australia. The ABS Living Cost Index also shows a rise of around 2.3 per cent in the cost of living in the June quarter.3
Tighter lending restrictions imposed by some lenders means Gen Ys now generally need to save a hefty sum before they can even think about signing a contract.
And the ramifications of that are that children are living at home longer or parents, if they can afford it, are sacrificing their retirement nest eggs and bankrolling the kids to help them attain the dream behind the ‘white picket fence’.
In fact, according to the Household Income and Labour Dynamics in Australia (HILDA) survey4, there has been a rise in the number of renters, particularly in the younger age groups. Between 2001-2004 and 2013-2016, home ownership for 35-44 age group fell by 5.2 per cent and for the age group 18-24 fell by 5.9 per cent. The overall figure across all age groups fell by 3.7 per cent.
The good news, however, is the Federal Government’s First Home Owner Grant (FHOG) scheme, which was introduced in 2000 to offset the effect of the GST on home ownership, is still up and running, administered by each state or territory under their own legislation. For more information on the scheme in your state or territory, visit: www.firsthome.gov.au
There are also other ways to enter the market. ‘Rentvesting’ has become popular with the younger generation, enabling them to buy an investment property in a location they can afford, but renting where they want to live for work and play.
While this is good in theory – given investment properties at the moment enjoy such perks as negative gearing, tax deductions and rental income – a number of lenders have restricted lending in some of these areas due to potential oversupply issues. With the Federal elections looming and the very strong likelihood Labor will be voted in, all this could change as they propose to limit negative gearing to new dwellings and halve the capital gains tax discount from the current 50 per cent to 25 per cent.
Meanwhile, others have either stopped or restricted interest-only loans, meaning servicing the loan has become harder. This is where I can help: a broker is able to let you know which lenders are lending and what their requirements are.
First home buyers make up 18.0 per cent of the market5 but unless there is affordable property for them to buy that figure is likely to decline.
The answer could well lie with governments ensuring the middle rings of major cities, along transport hubs and close to schools and other amenities, are opened up to enable more dwelling supply. This means rezoning transport corridors to ensure easy access to employment centres, although with huge population increases on the horizon (Australia’s population has just hit the 25 million mark and is expected to be close to 28 million in 10 years’ time6) the difference it might make is questionable at best.
On a positive note, some states have implemented, or are looking at doing so, measures such as the release of greenfield land and speeding up the planning and approval processes for developments.
But how much can the Millennial really rely on these policies?
What does immediately work in their favour is the number of options they have when it comes to choosing a lending package that best suits their needs. There’s plenty out there and a broker will be able to provide them with all the information they need to buy their first home away from home.
And if Mum and Dad can put up with them just a little bit longer (bonus points for doing your own washing, cleaning and cooking) then there’s every chance that deposit is not as far away as it seems… and that dream can become a reality.
1 https://blog.euromonitor.com/2014/10/global-urbanisation-trend-boosting-apartmentdwelling.html
2 www.numbeo.com/cost-of-living/country_result.jsp?country=Australia
3 www.abs.gov.au/ausstats/abs@.nsf/mf/6467.0
4 https://melbourneinstitute.unimelb.edu.au/__data/assets/pdf_file/0005/2839919/2018-HILDA-SR-for-web.pdf
5 www.abs.gov.au/AUSSTATS/abs@.nsf/Lookup/5609.0Main+Features1July%202018
6 www.populationpyramid.net/australia/2028/

Any advice contained in this article is of a general nature only and does not take into account the objectives, financial situation or needs of any particular person. Therefore, before making any decision, you should consider the appropriateness of the advice with regard to those matters. Information in this article is correct as of the date of publication and is subject to change.

RBA’s cash rate for August is unchanged at 0.25%

HomeBuilder, what you need to know

How We Can Help